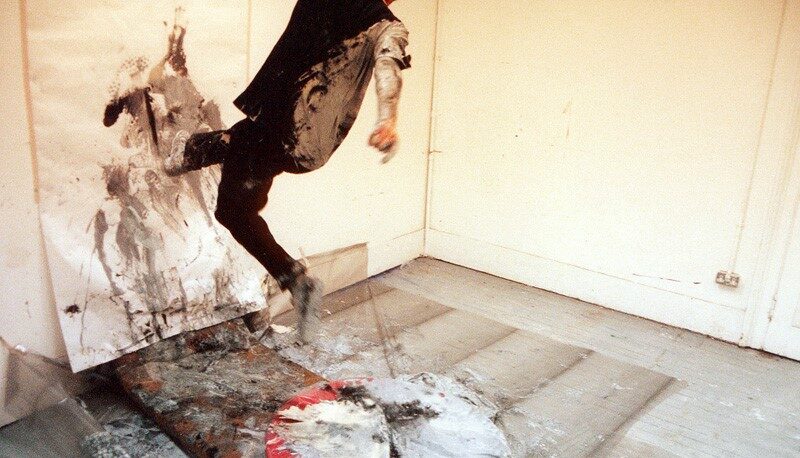 The Human Cannonball paintbrush technique will be realized at the Socle du Monde biennale 2021 by Danish artist Søren Dahlgaard. The project was conceived twenty years ago when Dahlgaard was an art student at The Slade School of Art in London. At that time the British Channel 4 commissioned Dahlgaard to produce the spectacular painting and to be trained by Guinness World Record holder Dave Smith Jr. in Missouri, USA. The plane tickets were booked for Dahlgaard and his film crew when Channel 4 decided to slash their commitment to the documentary film and the project was cancelled.

Now, HEART Herning Museum of Contemporary Art, Denmark has commissioned Dahlgaard to finally produce the first-ever Human Cannonball painting in front of an audience 28th of August. The Socle du Monde biennale is named after the Italian artist Piero Manzoni’s famed work Socle du Monde, Base of the World, an upside-down plinth holding the Earth. Dahlgaards Cannonball Painting is much in the same cheeky spirit of Manzoni’s work and what better place than HEART, which holds the most comprehensive collection of Manzoni’s work, to host the spectacular Human Cannonball Painting event.

A foundation built upon legends

The Human Cannonball project builds on the history and aesthetics of historic action paintings by artists such as Kazuo Shiraga of the Japanese Gutai group from the 1950s as well as Yves Klein and Piero Manzoni of the 1960s and Matthew Barney and Paul McCarthey’s action paintings in the 1990s. These artists added physical restraints and extensions to the body in different ways, thus developing new painting techniques where the process of painting became more important than the final canvas. The aesthetics of Dahlgaards Human Paintbrush techniques furthermore draw on Buster Keaton slap-stick stunts of the 1920s.

The Human Cannonball painting method is part of a series of Human Paintbrush techniques developed by Dahlgaard. Wall Riding, 2001, is the first action painting in the series and is named from the skateboard trick where you ride the wall and, thus, describes the painting technique. Then came Slide Painting, 2002, where Dahlgaard slides down a custom-designed slide and sweeps over a canvas. The Hurdler, 2007, is inspired by the Olympic running discipline hurdles, only in Dahlgaards world, the hurdles are the canvasses, which the artist needs to climb over to reach and paint other canvasses. In the Dough Warrior Landscape Painting, 2008, Dahlgaard emerged himself in a landscape where he painted the surrounding hedges by literary applying paint to the landscape. There was no canvas involved in this landscape painting, only paint and the landscape. The artwork consisted of a live performance for the audience to experience, the painted landscape, which consisted of plastic hedges, later framed, and a series of photographs of the process.

Learn more about Søren Dahlgaard and his projects here

Save the date for Søren Dahlgaard’s Human Cannonball performance with the event calendar here.