In Herning, Piero Manzoni worked side by side with Paul Gadegaard, Robert Jacobsen and Sven Dalsgaard. Gadegaard and Jacobsen were both active in the artists’ group Linien II. Most artists in Linien II were so-called Concretists who wanted their art to venture out into real-life society, as is evident from their efforts to detach painting
from the picture frame, from its delimited borders and from the surface itself. They aimed to exceed the boundaries of painting, carrying out experimental studies of how the established norms and framework could be broken down,
enabling painting to be part of everyday life. This was exactly what happened with Gadegaard’s immersive art for The Black Factory and, later, for parts of The Round Factory (Angligården) Here, painting and working life merged, as was also the case when Manzoni used fabric for his Achromes. Art came to life, and life became art

At Aage Damgaard’s Angli shirt factory in the 1960’s flourished then a lively and colourful artistic environment with the influence of young artists, whom Damgaard had invited to Herning in order to create new art within the framework of the modern shirt factory. One of these works were Piero Manzoni’s Socle du Monde, which creates the foundation, literally and figuratively, for the Socle du Monde biennale. The Prologue works as just that, a prologue for the rest of the biennale’s narrative..

This is the prologue, this is the beginning. The adventure of Socle du Monde begins where it all began. 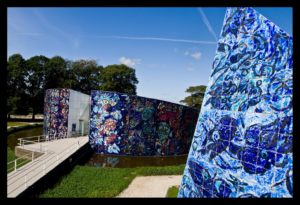 Artists that are part of The Prologue: